Launched in 2005, StrongVPN is undoubtedly the oldest VPN in our selection. It offers an average service, but far too minimalist to be indispensable. And the extra 250GB of cloud storage won’t change that.

The essential of the StrongVPN offer summarized in a few points:

Who is behind StrongVPN?

It may not look like it, but StrongVPN has been around for many years now. The service was started by a small California company whose original business was selling computers

Shortly after, the company specialized in web applications until it offered server rental services in its original area with the California.net website (now defunct).

The company now employs 60 people around the world, although its headquarters are in Florida. We’ll see later why this is frankly not a good location for a VPN service.

Right away, we notice that StrongVPN’s client is also sober. Perhaps a little too much so. Once it is launched, whether on mobile or PC, you are faced with a world map (not clickable), a button to choose the server and a button to connect

But this simplicity is not reflected in the use of the VPN itself, since there are no servers specialized in a particular use and the list of available countries does not give any direct information on the latency of the servers. Even the options offered are not very useful: a kill switch, the choice of protocol and that’s all

StrongVPN doesn’t even make the effort to be available in languages other than English. This is by far the most limited VPN in terms of options that we’ve been able to test so far, so it’s naturally aimed at the most neophyte of the VPN world. 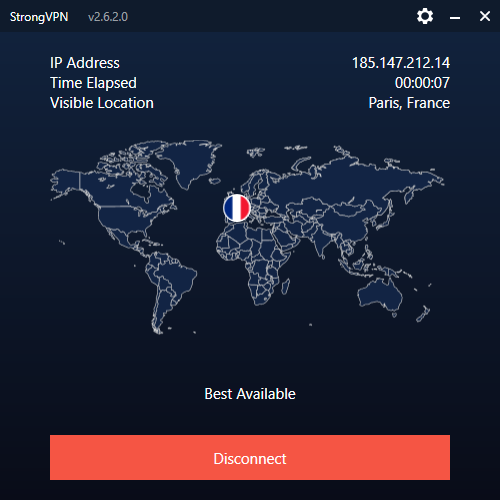 The real added value of StrongVPN is the 250 GB cloud storage provided by SugarSync (American online storage provider). Since the servers are based in the US, you can’t expect ultra-fast transfers from other countries either, but that’s always a plus

The real problem comes from the aging interface of the platform, but especially from the impossibility of transferring files larger than 300 MB, which finally makes it unusable in many cases.

250 GB in the cloud is good. With a better platform, it’s better.

As for the mobile version, it is a bit more modern in its approach. If the interface takes the logic of the world map (again not clickable), the navigation is much more pleasant without providing a satisfactory level of functionality. There is certainly a split tunneling option, but we lose the kill switch, a choice that is not very understandable. 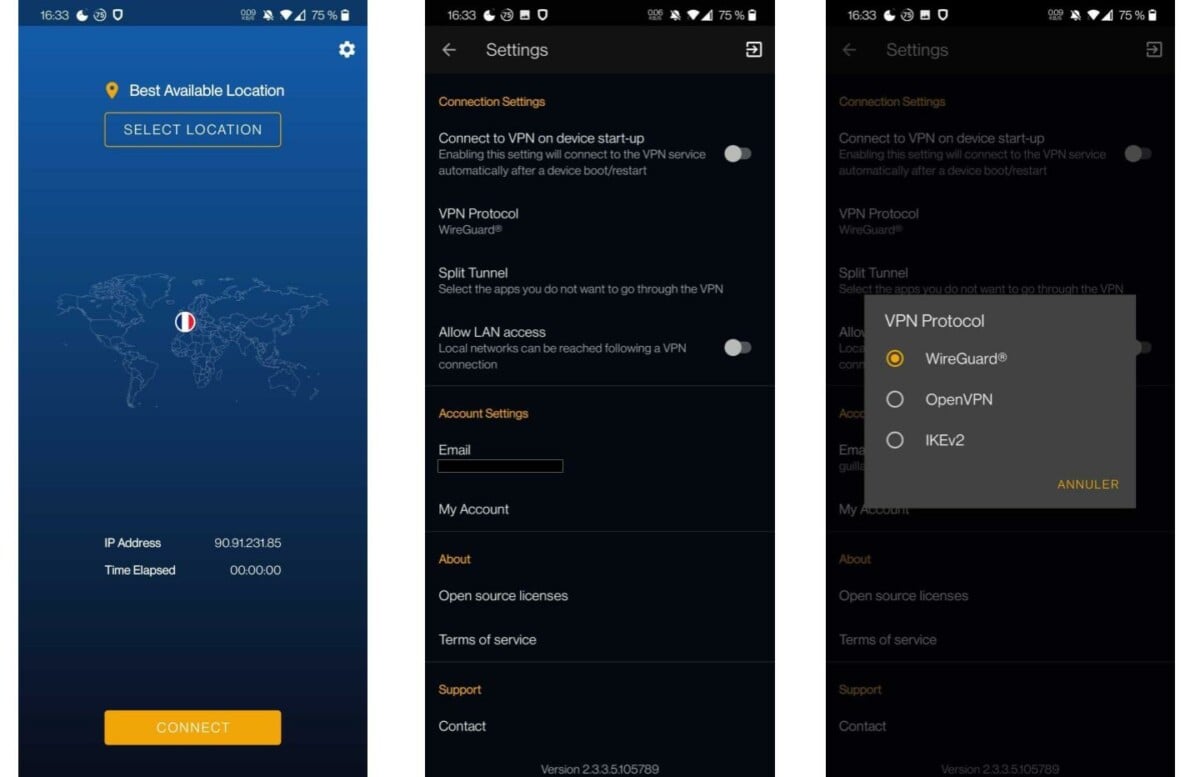 The mobile application is a bit prettier, but that’s all.

Without being disastrous, StrongVPN’s application experience is far from satisfactory and it is not the cloud storage, included in the offer, that makes the difference.

As far as servers and numbers are concerned, StrongVPN does not play in the same category as many of its competitors with only a little more than 500 active servers in 42 countries

Here are the results of our tests done on a 1 Gb/s fiber connection:

Like many of its counterparts, StrongVPN can say thank you to the Wireguard protocol, especially since it is offered by default. The results obtained are generally good, but they do not reach the top

Obviously if you switch to IKEV2 or OpenVPN, the results are not the same at all, with for example a download that struggles to exceed 100 Mb/s via an English server.

Access to Netflix US works surprisingly well. StrongVPN had no problems accessing the US catalog and the videos always launched in excellent quality.

Regarding potential DNS leaks, we didn’t detect any problems with stable servers, even under heavy load from the numerous connection tests. StrongVPN is therefore very reliable in this respect.

StrongVPN proudly displays its “Zero Log” policy on its website, but like IPVanish, it’s hard to believe. With StrongVPN’s headquarters based in the US, the service is required to provide any information about its customers to the authorities

This ranges from the sites visited, to the devices used and connection times. The good faith displayed by the VPN is therefore unverifiable and no mention of this point is explained in the dedicated page on the site.

Remember that the United States is part of the coalition of 14 eyes that participates in the mass surveillance on the Internet.

The customer service is done via a chat that you can find by logging into your account on the website. Unsurprisingly, it is entirely in English or goes through a rough automatic translation. A chat of SAV quite classic, neither more nor less effective than its competitors.

Let’s remember that Strong VPN is an American VPN which is almost exclusively aimed at customers based on the other side of the Atlantic. It is important to remember that the prices displayed by the VPN on its website are only in US dollars.

This is a relatively decent price if you compare it to other VPNs in our comparison, but it’s by no means a good deal either. Recall that Strong VPN allows for coverage of 12 devices simultaneously and includes 250GB of storage space regardless of subscription level.