Best VPN for Google/Android TV: which VPN to choose in 2022?

VPNs today offer many useful services on a wide range of connected devices. If we already know their benefits for computers and smartphones, their use is also very useful on Google TV.

Originally used to protect data exchanges between devices connected to the web as well as their anonymity, VPNs now offer many other features that go far beyond these frames. Among them: bypassing geographical restrictions or geo-blocking.

This feature allows you to legally access content that is blocked in a given locality due to the different legislations in force. So what could be more logical than to install a VPN directly on your TV to enjoy the catalogs of streaming and VOD platforms from all over the world on the big screen, in the best possible conditions.

Why use a VPN on a connected TV?

Installing a VPN on your connected TV has many advantages. First of all, you will benefit from a secure and anonymous connection when you surf from your TV. Then, depending on the VPN you choose, the non-logging policy ensures that your personal data cannot be shared, and therefore you avoid potential targeted advertisements from this or that application.

But the biggest advantage is probably the possibility to bypass the geo-blocking policies set by some countries. By relocating your IP address to a server located in the United States or Japan, for example, you can access all audio and video content hosted there without restrictions. This allows you to access many movies or series that are not available in France because of the media chronology, but especially because of licensing concerns.

We can also think of IPTV services, a VPN, allowing to access all their offers in a more secure way, the latter having a reputation of being insecure. Some services, even in France, are not accessible without VPN.

In any case, we advise you to use legal third party IPTV services like Molotov. However, it is possible to configure an IPTV access via Kodi on Google TV coupled with a VPN, especially for foreign channels.

What are the best VPNs for Google TV?

Most of the VPNs in our comparison have a Google TV version accessible directly from the Play Store. We have selected the three best services based on several criteria: interface, performance and compatibility with geo-blocked content.

You’ve probably heard of NordVPN, either on TV or on the web. It is probably the most famous VPN service to date, but its reputation is not overrated, as it is also one of the most effective.

Its other strong point concerns its performance, excellent speeds and a very controlled ping depending on the country where you connect, even if you should not expect miracles from the other side of the world.

Whatever the use, Nord VPN responds remarkably well to the effort, whether for video streaming from VOD platforms (Netflix, Prime Video, Disney+, etc.) or for P2P downloading. It also has specific servers for this type of use, which is not the case everywhere.

It is good to know that NordVPN is one of the VPNs that have a rather advanced transparency policy, especially regarding data retention. The service has used four independent auditing companies to confirm its privacy policy: no user data is kept if shared with third parties. If you want to know more about Nord VPN, you can check out our full review. 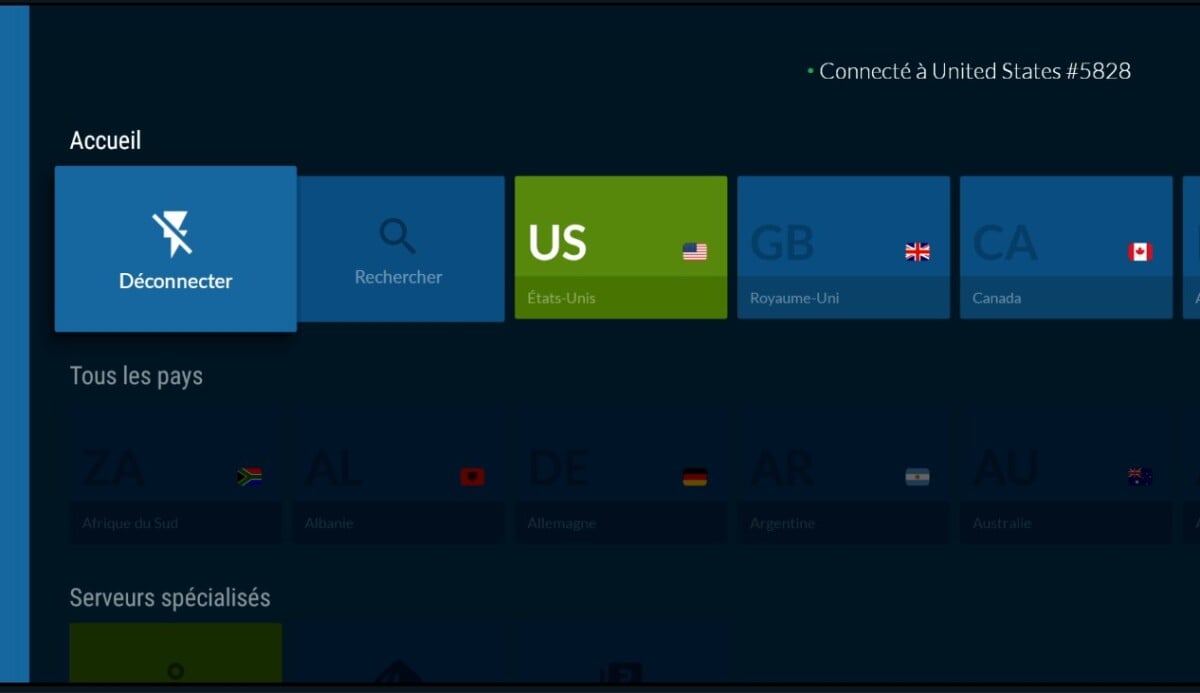 Forget about the desktop and mobile application’s world map, NordVPN has chosen a classic Android TV interface for its TV version

ExpressVPN: The most efficient

With over 10 years of experience, ExpressVPN has always relied on its performance to highlight its offer. With more than 3,000 servers and 160 locations in 94 countries, the service has a wide range of users, even if these figures are lower than those of its main competitors. However, efficiency is the key. ExpressVPN’s focus is on performance, highlighting its in-house protocol called Lightway, which competes with the open-source Wireguard protocol that many services already use.

Generally speaking, ExpressVPN’s servers have very good speeds, often higher than those of many other services. We note however that the VPN has chosen not to offer specialized servers (Streaming, P2P, Tor, etc.).

ExpressVPN claims, since its creation, a total confidentiality concerning the sensitive information of its users. The service therefore applies a strict zero-log policy that has proven its effectiveness many times over, even if there are still doubts, as we detail in our full review.

ExpressVPN’s Googe TV interface is the same as the mobile version, but with the same ease of use

ProtonVPN: The most secure

ProtonVPN is a veteran of the online virtual network world. The service has over 1,300 servers in 61 destinations and offers excellent performance, regardless of the country (depending on the distance, of course).

It also offers a very effective geo-blocking bypass system. Just connect to an American, Canadian or German server to access the national catalogs of Netflix, but also of other streaming video players. Beware, however, of its free version, which offers limited bandwidth and a limited number of servers, the United States being absent from this list.

As for ProtonVPN’s data retention policy, it is very clear (albeit in English): the provider claims not to retain any information regarding the use its users make of its VPN servers. The only data collected by ProtonVPN is the time a user connects to one of its servers (and only the time stamp). This is one of the most secure and transparent VPN services to date as we state in our full review.

How to install a VPN on your connected TV?

Depending on your device (TV or Android box), the installation method differs. Obviously, the easiest way is to install the application directly on your device when it is compatible through the Play Store. However, even if your TV is not compatible, it is still possible to use a VPN service through your router.

While waiting for a hypothetical Pixel TV by Google, Google TV (formerly Android TV) remains the most common TV OS among TV manufacturers. Here are the brands concerned:

And if your TV is not connected, the alternative of boxes under Google TV is a great way to make up for it. These use the same interface, even if they do not necessarily have the same updates depending on the brand.

If you are interested in a TV box, we can only advise you to look at the Nvidia Shield TV which is still the best Google / Android TV box on the market today. You can also turn to Google’s solution, the Chromecast with Google TV, a very efficient HDMI dongle to turn any TV into a connected TV.

To watch Netflix on your TV or to play games, TV boxes are now very effective products that complement the functions of your TV. Here is our selection of Android-compatible TV boxes, but…Read more

Some operators integrate Google TV in their TV boxes. Even if the interfaces have been partially customized by the operator, the Play Store is well accessible with all the downloadable VPNs. 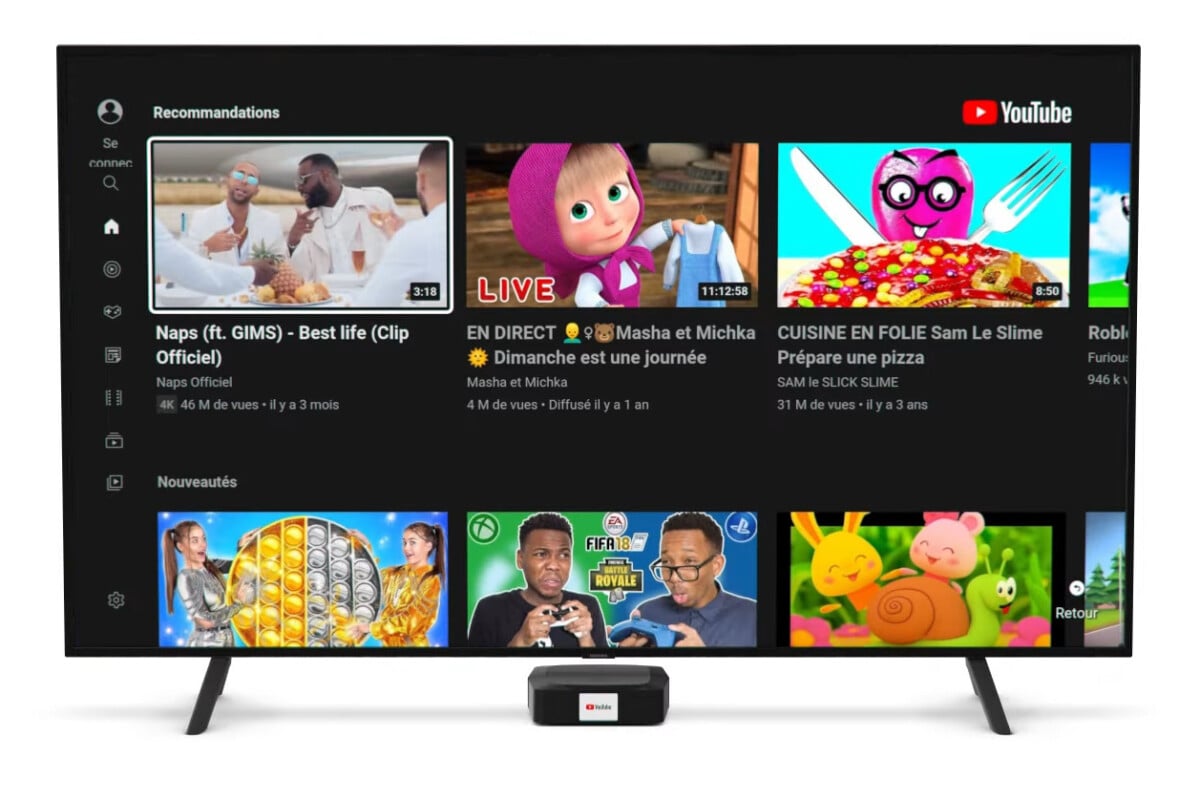 Apart from Google TV, there are of course other in-house OS used by other brands. These include WebOS at LG, TizenOS at Samsung, or FireOS TV.

If each of them has a panel of common applications, it is not really the case of VPNs that have deliberately chosen to develop their applications primarily on GoogleTV or FireOS (itself based on Android), the most widespread platforms to date.

It is however possible to use a VPN on these platforms without having to use an application, but simply through an internet box, router or modem.

Most modern routers or box operators support VPN connections. All you have to do is manually enter the details of the VPN account you are using in your router settings. So first make sure that your router is VPN enabled. However, it is impossible to give a precise procedure for each router or Internet box on the market, as the interfaces and ways of proceeding can vary widely. Fortunately, the connection interfaces of your boxes or routers are based on the same organization logic.

In all cases. There must be a “VPN” or “Private Network” menu in this connection interface. Some Internet boxes will ask for a specific “Pro” or “Advanced User” access to have access to VPN options.

Here is the information you will usually be asked for.

Once you have filled in all your information, click OK to save them and restart your router.

Which VPN should be used for your Kodi Media Player