DuckDuckGo app wants to make you invisible on Android

DuckDuckGo’s Android application now includes a beta version of a protection system to block tracking by applications installed on your mobile.

DuckDuckGo has taken another step in protecting your personal data. The application, which acts as a web browser and search engine, and whose leitmotif is to protect your online privacy has just introduced a new security feature in its latest update on Android.

Unveiled last year in private beta, this feature, soberly named “Protection against app tracking” is officially available in open beta in the application. It allows, as its name suggests, to block the tracking operated by all the applications installed on your smartphone, even when you are not using them.

In other words, the entire operating system can benefit from this new protection. For each application, DuckDuckGo is able to list the types of data your applications have attempted to collect before blocking them.

“App Tracking Protection for Android launches today in open beta. It’s a free feature of the DuckDuckGo Android app that helps block third-party trackers in your phone’s apps (like Google snooping in your weather app), which means more complete privacy and less scary targeting,” DuckDuckGo said in its release.

DuckDuckGo does not hide it. To offer its system of protection against tracking applications, the search engine was largely inspired by the system deployed by Apple on the iPhone since December 2020.

Based on the fact that Android smartphones are the most used in the world, DuckDuckGo decided to offer its own protection system. This is a welcome initiative, even though there is no native solution of this type on Google’s mobile operating system.

“The average Android user has 35 applications on their smartphone. Based on our testing, we’ve determined that a device with 35 apps can experience between 1,000 and 2,000 tracking attempts each day, and contact over 70 online tracking companies,” DuckDuckGo explains on its blog.

Must Read  NordVPN is offering a massive Black Friday deal, now is the time to take advantage of it! 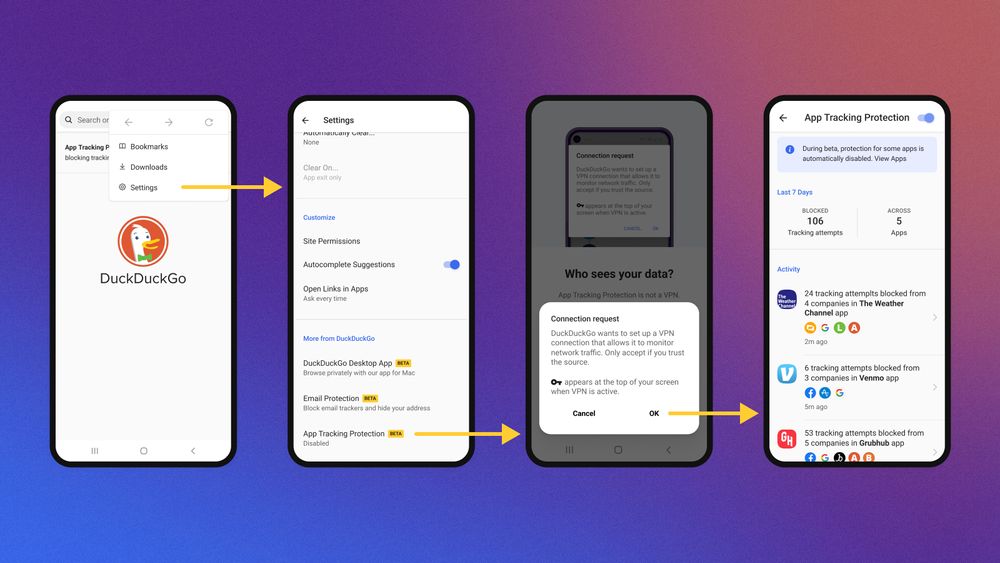 Off by default, but fully configurable

DuckDuckGo then detects all the applications installed on your device and lets you select which ones you want to enable or disable the anti-tracking option.

You’ll be able to see in real time which applications you’ve visited on your smartphone that have tried to track you. This protection against third-party trackers is based on a frequently updated list of known trackers. In addition, DuckDuckGo uses a local VPN connection to operate its system. As a result, the entire process takes place locally on the smartphone, without any data passing through DuckDuckGo’s servers.